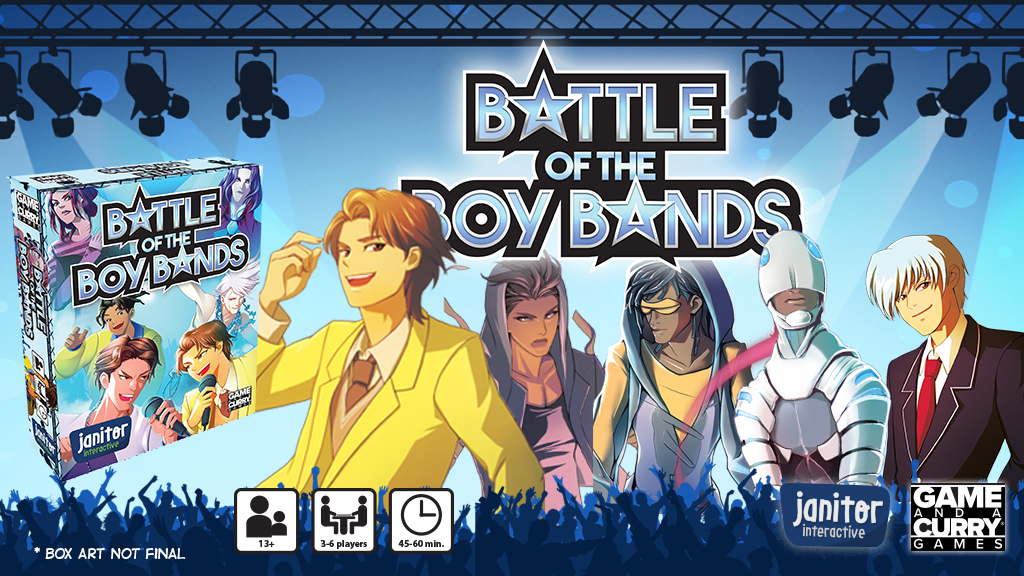 Battle of the Boybands

Created by Game And A Curry, LLC

A fast-paced take that card game with drafting elements, where you take on the role of a music producer, building a boy band!

Latest Updates from Our Project:

Some of you might have noticed that the BackerKit surveys have been sent out! We've received about 75% of the surveys. If you haven't filled yours out yet, please do, so we can have everything ready for when we ship the games out.

Even if you haven't backed at the level to receive a game, we'll be sending out a postcard to everyone as a thank you!

As for the games, we're estimating that they'll be sent over to us from the manufacturers by November, so we're on track for shipping them out to all of you in November!

Clio has been working on several projects, one of them is for Honey and Hot Wax, an anthology of games about sex by a diverse group of nine designers, edited by Lucian Kahn and Sharang Biswas.

On July 25th at 1:55pm EST, we'll be playing Battle of the Boybands at Resonym!

Banana is also co-designing and co-publishing Jiangshi: Blood in the Banquet Hall with Sen-Foong Lim and Wet Ink Games! A collaborative storytelling tabletop RPG (with limited combat) about a Chinese immigrant family running a restaurant in 1920's San Francisco, faced with having to balance restaurant life and fending off hopping vampires!

Finally, we also want to shout out one of our friends, Jeeyon Shim, who's working on a really cool 1 to 2 player RPG called Wait For Me!

Quote: "WAIT FOR ME is a three week journaling game about time travel and connection, for one or two players, with prompts emailed to you daily from August 3rd to August 25th 2020."

We're in the final stages of layout for BATTLE OF THE BOYBANDS!

The designers, Clio Yun-su Davis and Vicci Ho, have been working hard to make sure everything is just right, before we move onto the final stages.

Once these are all proofed and ready to go, we'll be sending it all out to our printer. From there, we'll be keeping you updated every other week on how things are going on our end!

We'll also be sending out surveys closer to when we get the games from the printer. We realized that some backers might be moving between now and then, so we want to make sure we get everything in right!

As an aside, we are also co-publishing another game with Wet Ink Games that will be launching on Kickstarter July 14!  Jiangshi: Blood in the Banquet Hall is a liiittle bit different from Battle of the Boybands. It's a tabletop roleplaying game about a Chinese-American family running a restaurant in 1920's Chinatown. In the day, they face the stress of running a restaurant, while at night, hopping vampires come out and attack everyone! It's designed by Banana Chan and Sen-Foong Lim and there's a whole cast of incredible writers, artists and editors working with them. You can follow the Kickstarter here.

We just wanted to let you all know that we'll be sending out BackerKit surveys next week! We'll have add-ons, including more lanyards, buttons, and our other games!

So what is our focus now?

While we're screening the cards, we noticed a couple of issues, so we're just relaying them out right now.  We're also redoing a bit of art, putting final touches on the box and final edits on the rulebook, before we send it all off to the printers! Our ETA for everything to get ready, before the FINAL, FINAL send off is within 2-3 weeks.

The next big thing we'll be updating on is some screenshots of the files so you can see what's going on BTS. After today, we'll also be sending out updates every other week, so it doesn't clog up your inbox!